Gauge Capital’s April 2017 recapitalization of Medicaid-focused Pediatric Dental Providers brings to mind the rapid increase in the number of dental support organization (DSO) transactions over the past few years. With more than a half-dozen DSOs of at least 25 locations being acquired and countless smaller dental practices forming partnerships with larger groups, investors and business owners are paying close attention to the perceived rising valuations of these companies. The small subset of reliable publicly available transaction data shows EBITDA multiples as high as 11x to 12x for larger transactions, significantly higher than in prior years. 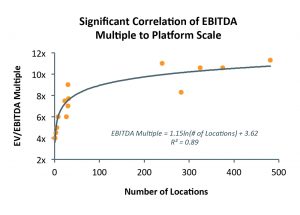 While some dental operators might argue that the industry is “red-hot” and desire that their businesses command similar valuations, there is a highly predictive correlation between a DSO’s number of locations and the EBITDA multiple that it ultimately garners in a sale. As a dental platform’s number of facilities expands, not only will the valuation increase due to the additional EBITDA, but it will also likely raise the multiple applied to that EBITDA. In fact, Intrepid’s research revealed a strong correlation, indicating that 90% of the variation in EBITDA multiples stems from a DSO’s facility count, and not necessarily other factors such as revenue or EBITDA.

This relationship also highlights a diminishing impact on valuation as a DSO increases its number of locations. For example, a smaller regional DSO can drive a large increase in its valuation multiple by opening five locations and growing from 10 to 15 sites; this should correspond to an increase in valuation from approximately 6x to 7x a DSO’s LTM EBITDA. However, if a large national platform adds another five locations, for example, 200 to 205, its valuation multiple would likely remain unchanged at approximately 9.7x.

Our analysis highlights two key takeaways for DSO entrepreneurs and business owners. First, owners of small DSOs that are considering a sale should consider that opening just a few new locations before a sale could lead to a higher EBITDA multiple. Second, while platform acquirers may benefit from adding additional EBITDA through acquisitions, these incremental tuck-ins will not materially impact their own exit multiple as they already have reached a “platform” multiple.

While the number of locations appears to be the most important factor in driving EBITDA multiples, many other company attributes could directly affect the profitability of a company and impact valuation. Critical business characteristics such as brand strength, payor relationships, information systems, and infrastructure are the foundations of a management team’s ability to drive growth and the resulting EBITDA that valuation multiples are applied to.

The dental sector remains one of many in healthcare that is undergoing rapid consolidation. In a subsector in which over half of dentists still work as solo practitioners and increasingly burdensome practice management trends push dentists toward DSOs, the perceived increase in valuations seems rather logical, with no sign of cooling off in the near term.