Intrepid today announced that it served as the exclusive financial advisor to Blue Microphones (Blue), a portfolio company of The Riverside Company (Riverside), on its agreement to sell to Logitech International S.A. (NASDAQ: LOGI). Based in Westlake Village, Calif., Blue is an award-winning innovator in microphone technology and design for professionals and consumers. Intrepid’s Commercial & Consumer Technology team had previously represented Blue on its sale to Riverside in 2013.

“It has been a pleasure to work with John Maier and his team to build Blue over the past several years,” said Brian Sauer, Partner at Riverside. “Intrepid’s Commercial & Consumer Technology team did a great job running a competitive process and finding the right buyer for Blue. Their in-depth knowledge of Blue and the industry contributed meaningfully to this excellent outcome.” 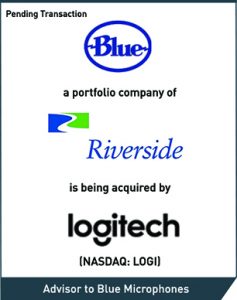 “Blue has achieved robust growth over the past five years. It is particularly fulfilling to be part of this exciting transaction after working with Blue on its sale to Riverside in 2013,” said Gary Rabishaw, Managing Director and Head of the Commercial & Consumer Technology practice at Intrepid. “Congratulations to the teams at Blue and Riverside for creating a truly differentiated market leader.”

Founded in 1995, Blue is a leader in the fast-growing digital microphone market serving a broad base of musicians, digital content creators, and gamers. Blue is known for popular podcasting microphones like the Yeti and Snowball.

Riverside is a global private equity firm focused on acquiring growing businesses valued up to $400 million. Since its founding in 1988, Riverside has invested in more than 540 transactions, and its international portfolio includes over 80 companies.

The companies have signed a definitive agreement and the transaction is expected to close by the end of August 2018.

Intrepid provides M&A, capital raising and strategic advisory services to entrepreneurs and middle-market companies in various industry sectors. Our heritage, rooted in our founders’ successful 35-year history, breeds a culture that embraces teamwork, tenacity, and creativity to win big for our clients. We believe that every company has an entrepreneurial passion that drives it and a story that defines it. Our team delivers results through skillful positioning and relentless execution. Based in Los Angeles, Intrepid augments its international capabilities through its active participation in Oaklins, an exclusive global alliance of M&A advisory firms.