The Beauty Care M&A market finished the year on a high note with 30 transactions in Q4’17, bringing total transactions to over 100 for the second straight year. Not only was volume strong, the quarter witnessed a rash of high-profile strategic M&A transactions, with deals announced from Procter & Gamble, Kao, Unilever, Colgate, Henkel, Shiseido and The Hut Group.

As we look into the 2018 crystal ball, we anticipate more of the same—nearly all the strategic buyers are active, new private equity (PE) backed platforms have been formed and PE remains in love with the beauty care sector. 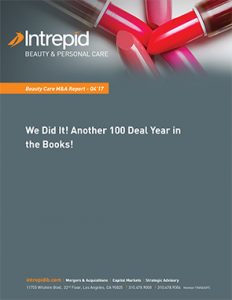