Consumer companies are redefining what it means to be successful 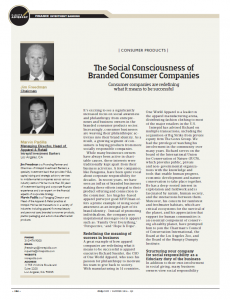 It’s exciting to see a significantly increased focus on social awareness and philanthropy from entrepreneurs and business owners in the branded consumer products sector. Increasingly, consumer businesses are weaving their philanthropic activities into their brand identity. As a result, a growing segment of consumers is buying products from more socially responsible companies.

While many businesses owners have always been active in charitable causes, these interests were traditionally kept apart from their business activities. A few companies, like Patagonia, have been quite vocal about corporate responsibility for decades. In recent years, we have seen an influx of branded businesses making these efforts integral to their product offering and connection to the consumer. Los Angeles-based apparel purveyor good hYOUman offers a prime example of using social awareness as an integral part of its brand identity. Instead of promoting individualism, the company uses inspirational messages on its apparel such as: ‘Family Over Everything,’ ‘Perspective,’ and ‘Hope Is Dope’.

Redefining the meaning of success in business

A great example of how apparel companies are redefining what it means to be successful is apparel executive Richard Sneider, the CEO of One World Apparel, who uses his passion for philanthropy to motivate his team to give back to society. With manufacturing in 14 countries, One World Apparel is a leader in the apparel manufacturing arena, distributing fashion clothing to most of the major retailers in the U.S.

Intrepid has advised Richard on multiple transactions, including the acquisition of Big Strike from private equity firm The Gores Group. We had the privilege of watching his involvement in the community over many years. Richard serves on the board of the International Union for Conservation of Nature (IUCN), which provides public, private and non-governmental organizations with the knowledge and tools that enable human progress, economic development and nature conservation to take place together. He has a deep-rooted interest in exploration and fieldwork and is fascinated by nature, human society, and the interactions between them. Moreover, his concern for rainforest and freshwater habitats, which are critical ecosystems for the survival of the planet, and his appreciation that support for human communities is an essential component of conserving a healthy planet, have prompted him to join the Chairman’s Council of Conservation International, the Board at the Los Angeles Zoo, and the Board of the Humpty Dumpty Institute.

In addition to their own involvement in social giving, many business owners view social responsibility as a fiduciary duty of their companies. Companies such as the Honest Company and Dr. Bronners have legally incorporated as Benefit Corporations and/or adopted the B Corp certification. In the U.S., a Benefit Corporation is a type of for-profit entity formed under corporate law that dedicates resources to promoting a positive impact on society, workers, the community and the environment, in addition to generating a profit. The corporate designation provides its directors the legal protection to consider corporate goals other than, and sometimes in direct conflict with, corporate profits. “B Corps” is a certification designated by the nonprofit B Lab to meet rigorous standards of social and environmental performance, accountability and transparency. Today, there is a growing community of more than 1,600 Certified B Corps from 42 countries and over 120 industries working together toward one unifying goal: to redefine the metrics of success in business.

In the age of social media, consumers demand to know more about the brands they use on a daily basis. While celebrity endorsements or marketing were historically effective methods of driving sales, today brands must do much more to inform their customers of what they stand for. One of the great results of the proliferation of social media is the awareness it has brought to social consciousness. Consumers want to know that they are supporting companies that are not only making great products, but that are also the engines for positive change. Consumers value corporate citizens that share in the fight for empowering people of lesser means and resources.

The marketplace is increasingly rewarding brands that promote social consciousness. A few examples of investor interest in brands that promote social well-being include the Honest Company, Tom’s Shoes, and Warby Parker. The Honest Company, which is rumored to be preparing for an Initial Public Offering (IPO), was valued at $1.7 billion in a financing round last year, after only five years in business. Tom’s Shoes, which was founded as an ethical footwear company, donating one pair of shoes to a child in need in a developing country for every pair it sells, also received institutional capital. In 2014, the company reported receiving an investment from Bain Capital after being in business for eight years. Warby Parker, which also donates a pair of glasses to non-profit organizations for every pair purchased, was last said to be valued at $1.2 billion (estimated at 12 times 2015 sales) with a potential to go public.

While we all work hard every day to secure the financial well-being for our families, it is rewarding to see that companies are beginning to view their role to include giving back to the society that purchases their products and services. As advisors to consumer branded businesses, Intrepid’s Apparel & Retail team often provides guidance on a broad range of value-creating changes that business owners can implement. These changes must be authentic and must connect at a personal level with the individual consumer.