The technology sector continued to lead the global M&A markets in 2016, with 1,613 reported acquisitions (according to Thomson Reuters) that had an estimated deal value of $323.5 billion. The fourth quarter alone contributed 472 deals for an aggregate $96 billion. Digging in further shows that Software and IT Services were among the most active sectors within Technology in 2016, representing 659 and 512 deals, respectively. 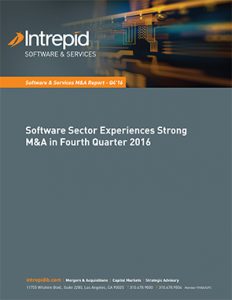