Fast forward to July 2016 and both Aetna’s $37 billion acquisition of Humana and Anthem’s $48 billion bid for Cigna are being blocked by the Federal Trade Commission’s (FTC) antitrust regulators. All four parties are holding out for their mergers’ approval, but probability is beginning to look slim, which raises new questions about how these transactions, failure could impact the healthcare industry.

While out-of-the-box, vertical integration deals are commonly seen as higher risk, they may soon become the norm for large-cap healthcare companies because of the lower probability of federal antitrust rejection.

While a new President could soon alter the government’s stance, the Obama Administration, in connection with the ACA, has been hard-pressed to maintain a healthy level of competition between insurance behemoths and has not been shy to block large deals due to antitrust considerations, including the recently attempted mega-deal between Pfizer and Allergan. Regulators are convinced that the mergers’ approval would limit competition and directly increase the average patient’s healthcare costs. 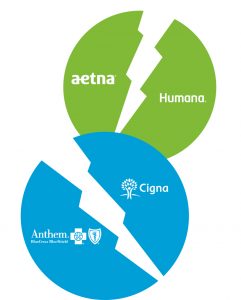 What does this mean for the broader healthcare market? The FTC, which is dedicated to advancing consumer interests through encouraging competition, could view a consolidation of this magnitude as a threat to the viability of options under the ACA’s Exchange, Medicare Advantage, and employer-sponsored health plans. Even though the government could establish a single payor by expanding Medicare or Medicaid, a consolidation of private healthcare insurers could facilitate this strategy without government intervention. If a single payor system had been in the near future, it is likely that the Administration would have approved these mergers to encourage a federal consolidation.

What does this mean in the interim? In the case that either merger is blocked, the acquiring parties will aggressively look to make more acquisitions to comfort investors concerned about their growth prospects. While WellCare, Centene and other mid-sized health plans would likely become highly desirable targets, all four insurers will also look to acquire less risky, silo-breaking companies that bolster their influence in less controversial ways. Benefit management companies like Magellan and risk stratification analytics companies like CIOX are logical complementary acquisitions outside of their core competencies.

While out-of-the-box, vertical integration deals are commonly seen as higher risk, they may soon become the norm for large-cap healthcare companies because of the lower probability of federal antitrust rejection.