The Beauty Care M&A market posted 28 transactions in Q3’19. While M&A transaction volume was down versus a record 33 transactions in Q2’19, deal volume increased more than 8% over Q3’18. The quarter brought year-to-date volume to 89 transactions, an increase of 9% over the same period last year. 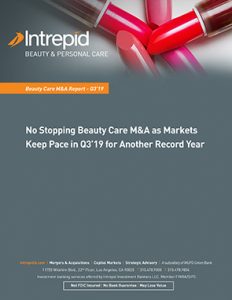 Q3’19 witnessed two transactions with enterprise values of over $1 billion – following two billion-dollar deals in the previous quarter. Strategic acquirers also remained active with acquisitions by Colgate-Palmolive, Henkel and S.C. Johnson along with the entry of Cronos Group into the CBD skin care sector. The quarter saw strategics on the sell-side with the sale of the Salon Liquids Division of Conair and sale of the Younique brand by Coty.

Given deal rumors, market momentum and a peek into fourth-quarter deal activity, 2019 is set up to be another record year in beauty care M&A deal volume.