Our team recently attended NAMM 2017, where we had a chance to connect and see the latest and greatest technologies in the MI and Professional A/V world! In this special issue of our M&A Soundcheck, we take a look back at 2016 and highlight some of the bigger deals in the music industry. 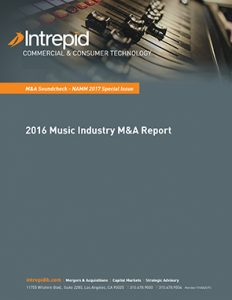 2016 ended strong with several large deals announced, including Samsung’s acquisition of Harman International for $8 billion, which will accelerate its growth in the automotive and connected technologies sector. Audience measurement company Nielsen also stepped into the acquisition arena with a $560 million cash offer for Gracenote, a worldwide leader in music and video metadata. Closing out the year, The Hollywood Reporter-Billboard Media Group’s acquisition of the assets of rock music publication Spin will help it expand its online audience and increase revenues.

Our Commercial & Consumer Technology team also had a busy year with several notable transactions, including the sale of VXi Corporation, a leading provider of headset communications solutions, to GN Audio (Jabra), a Denmark-based leader in intelligent audio solutions. In addition, we advised Amped Wireless, a developer and marketer of premium WiFi networking solutions, on its sale to Digital Products International, a leading producer of consumer electronics selling products under the Memorex, Zeki, iLive, GPX, WeatherX, Culinar and Oster brands.