The family office is a new kind of financial partner 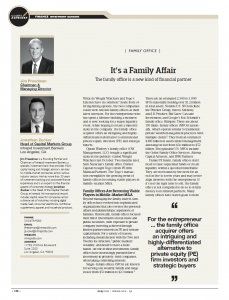 What do Weight Watchers and Togo’s Eateries have in common? Aside from offering dining options, the two companies count well-known family offices as their latest investors. For the entrepreneur who has spent a lifetime building a business and is now looking for a major liquidity event, while hoping to retain a minority stake in the company, the family office acquirer offers an intriguing and highly differentiated alternative to institutional private equity investors (PE) and strategic buyers.

Beyond managing the family asseets, family offices have evolved into sophisticated organizations that also oversee the personal affairs and philanthropic aspirations of families. Historically, family offices focused their direct investments in real estate and public securities, with exposure to private company investing achieved through limited partner interests in PE and venture capital funds. For a variety of reasons, including dissatisfaction with the Two and Twenty fee structure,¹ public markets’ volatility, and desire to have a more hands-on role in their investments, family offices have increasingly pursued direct investment in privately-held companies, often taking controlling interests.

Single-family offices (SFOs) are known for serving one wealthy family and range in size from $51 million to $2.1 billion.² There are an estimated 2,500 to 3,000 SFOs nationally holding over $1.2 trillion in total assets. Notable U.S. SFOs include the Pritzker Group, run by Anthony and J.B. Pritzker; Bill Gates’ Cascade Investment; and Google’s Eric Schmidt’s family office, Hillspire. There are about 150 multi-family offices (MFOs) nationally, which operate similar to traditional private wealth management practices with multiple clients.² They hold an estimated $400 billion in assets under management and range in size from $36 million to $52 billion. Recognizable U.S. MFOs include the Geller Family Office Services, Athena Capital Advisors, and BNR Partners.

Unlike PE funds, family offices don’t need to raise sequential funds or create liquidity within a specified timeframe. They are not bound by the need for an exit in five to seven years and may better align interests with the entrepreneur. If it’s not the right time to sell, the family office is not compelled to do so to return money to its limited partners. Many family offices have stated goals to hold the company investment for many years. Since family offices don’t have to satisfy outside investors with near-term internal rate of return or cash-on-cash returns, they tend to offer more flexible deal structures.

In addition to attractive economic terms and deal structures, family offices may also provide other real strategic benefits to entrepreneurs. This is especially the case when the source of the family office’s wealth was a liquidity event in the same industry as the company in which they are investing. Under this scenario, the investor often brings experience, strategic insight and key relationships that can have a direct impact on the company’s bottom line. From the family office’s perspective, an investment in a familiar space can give the family an outlet for the passion and entrepreneurial spirit that led it to build the business that created its wealth in the first place.

For example, Microsoft Co-Founder Paul Allen’s Vulcan Capital recently participated in reality startup Magic Leap’s $793 million Series C, after investing in its Series B in late 2014. Magic Leap aims to completely redefine the world of computing as we know it, and it may give Allen the opportunity to reinvent the tech industry once again.

Many family offices have evolved from a small teams of investment managers that sourced private company investments through proprietary channels, to outfits resembling full-fledged institutional funds with proportional marketing efforts and aimed at firms which control deal flow in the M&A market. This seems to be especially prevalent among “new money” families, like those who have built their wealth in the past few decades in areas like technology and media, including entrepreneurs Allen, Winfrey and Michael Dell. MSD Capital, Dell’s family office, employs 80 people, including professionals who focus on sourcing private deal flow and participate in investment banking auction processes.

For family offices with more than $500 million to invest, it’s not hard to see the benefits of foregoing the Two and Twenty model and instead using those management fees to pay an internal team that will focus on finding great investments, without the distraction of raising capital or harvesting a portfolio to facilitate a new fund raise.

From an Investment Banker’s Perspective

Family offices on investor lists have gone from an afterthought to being a significant part of the M&A and capital raise process. In order to provide optimal alternatives to our clients, we need to constantly monitor and maintain relationships with emerging family offices looking for private company investments. We educate our clients on the relative benefits and drawbacks of going the family office route versus more traditional paths.

In a recent engagement, we advised a leading digital marketing and advertising agency seeking a partner that would provide not only liquidity, but an edge that would help the company win new business and generate incremental revenue from its existing Fortune 500 client base. Our client had the option to team up with the ‘usual suspects’—large New York and London-based agency holding companies—but was hesitant to do so due to a strong desire to maintain its independent culture, which gave it a big advantage in winning business. We were able to bring our client the best of both worlds: a family office whose source of wealth came from the advertising industry with C-level connections at all the right target clients and whose patient capital and hands-off approach would allow the company to remain fiercely independent, but with the capitalization of a much bigger player.

While many of our clients appreciate the PE strategy of less patient capital, which motivates everyone to grow the company and realize additional liquidity in the foreseeable future, the family office is another viable option. As wealthy baby boomers exit their businesses and establish new family offices with more modern, hands-on approaches and existing family offices remain disenchanted with management fee structures and global market uncertainty, entrepreneurs seeking capital will continue to benefit from a plethora of increasing options in their search for liquidity and partnership.

² Financial Planning: “The Rise of the Multi-Family Office”.