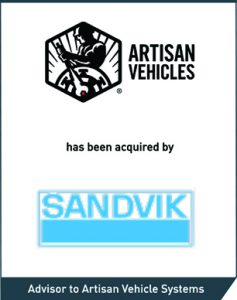 “Artisan is putting the entire mining equipment industry on notice with its innovation and commitment to building the most efficient vehicles for an industry undergoing change. The company is doing for mining what Tesla did for automobiles—making electric mainstream,” remarked Jim Freedman, Chairman and Managing Director of Intrepid. Artisan initially hired Intrepid in the spring of last year to help the manufacturer raise growth capital, which was initially accomplished through non-bank debt financing. “As we began pitching equity investors to help raise additional capital, Artisan leadership decided to entertain a possible sale,” said Jonathan Zucker, Head of the Capital Markets Group and Managing Director at Intrepid. “The team concluded that their vision to transform the industry was so bold that it would take far too much capital to do on their own, so they let us expand our marketing efforts to talk to strategic players about investing. As we started going down that road, it became clear that to accelerate growth would require not only capital but also additional infrastructure and global reach.”

Today’s underground mining market is dominated by diesel trucks which can cause health issues and result in significant ventilation and cooling expenses. Artisan has seen its end users, some of the largest mining companies in the world, increasingly recognize the financial benefit of eliminating underground diesel emissions. “We believe that an inflection point in the mining industry is imminent,” said Mike Kasaba, CEO of Artisan. He added: “Artisan has an addressable $6 billion market and patented electric drive technology that includes a lithium battery system, powertrain components, drive control systems and game-changing mining methods. With Sandvik as our partner, we are well-positioned to lead this industry forward to the battery electric age.”

Innovative players rely heavily on Artisan’s battery powered equipment for their production and have benefited by gaining faster access to rich reserves and reducing ventilation costs. Other early adopters are in advanced stages of their equipment conversion plans and the 99% of the $6 billion primary mover market that today relies on diesel is likely to follow suit and create unprecedented demand as Artisan’s products become mainstream.

Founded in 2010, Artisan is based in Camarillo, Calif., and one of a handful of companies that have built ground-up battery electric vehicles—rather than retrofitting existing vehicles with battery power—for mining gold, silver and other precious metals. Artisan is leading a nascent industry, similar to what Tesla did in the passenger car business when it began to engineer its cars to run optimally on battery power. Intrepid was able to attract interest from large, global conglomerates looking to get into the battery electric vehicle category through a purchase rather than internal development.

Intrepid provides M&A,  capital raising and strategic advisory services to entrepreneurs and middle-market companies in various industry sectors. Our heritage, rooted in our founders’ successful 35-year history, breeds a culture that embraces teamwork, tenacity, and creativity to win big for our clients. We believe that every company has an entrepreneurial passion that drives it and a story that defines it. Our team delivers results through skillful positioning and relentless execution. Based in Los Angeles, Intrepid augments its international capabilities through its active participation in Oaklins, an exclusive global alliance of M&A advisory firms.