Sports, entertainment, and the art of company valuation 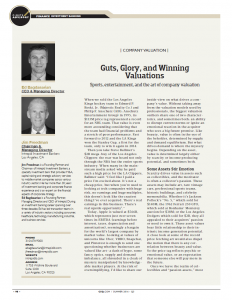 When we sold the Los Angeles Kings hockey team to Edward P. Roski, Jr. (Majestic Realty Co.) and Philip F. Anschutz (AEG: Anschutz Entertainment Group) in 1995, its $113M price tag represented a record for an NHL team. That value is even more astounding considering that the team had financial problems and a stretch of poor performance. Fast forward to 2012 and the LA Kings won the Stanley Cup, a first for the team, only to win it again in 2014. Then you take Steve Ballmer’s $2B mega-buy of the Los Angeles Clippers: the roar was heard not only through the NBA but the entire sport  industry. When many in the mainstream media asked why he paid such a high price for the LA Clippers, Ballmer said: “I feel like I paid a price I’m excited about. It’s not a cheap price, but when you’re used to looking at tech companies with huge risk, no earnings and huge multiples, this doesn’t look like the craziest thing I’ve ever acquired. There’s real earnings in this business. There’s real upside opportunity.”¹

Today, Apple is valued at $566B, which represents just over seven times its EBITDA (earnings before interest, taxes, depreciation and amortization), seemingly a bargain for the world’s largest company by market value. Looking at values of unicorns like Uber, VRBO, Snapchat, and Pinterest is enough to send one questioning whether businesses are valued like art—a dash of hype, some fancy optics, supply and demand imbalance, all shrouded in a cloak of mystery manipulated by knowledgeable market players. At the risk of oversimplifying, I’d like to share our inside view on what drives a company’s value. Without taking away from the valuation models used by professionals, the biggest valuation outliers share one of two characteristics, and sometimes both: an ability to disrupt current norms or ignite an emotional reaction in the acquirer who sees a big future promise. Like beauty, value is often in the eye of the beholder, determined by supply and demand equilibrium. But what drives demand is where the mystery begins. Depending on the asset, value is determined largely either by scarcity or income producing potential, and sometimes both.

Scarcity drives value in assets such as collectibles, and the motivator is often a collector’s passion. These assets may include art, rare vintage cars, professional sports teams, historic buildings, and celebrity memorabilia. Whether it’s Jackson Pollock’s “No. 5,” which sold for $140M; the 1962 Ferrari 250 GTO, which sold at Bonhams’ Monterey auction for $38M; or the Los Angeles Dodgers which sold for $2B, they all appealed to their acquirers’ passion or need to own it. These asset values bear little relationship to their intrinsic income generation potential. A close look at some of the record price fetching art would also dispel the notion that there is any correlation between beauty and value. So the price tag reflects psychic or emotional value, or an expectation that someone else will pay more in the future.

Once we leave the realm of collectibles and “passion assets,” most business assets are valued based on their income generating potential, and such potential is highest when the business has the ability to disrupt the status quo. The most common approach for estimating enterprise value involves applying a multiple to a company’s operating cash flow, or EBITDA. But what determines the magnitude of the multiple, and what happens when EBITDA is negative or negligible?

In Business Enterprises, the Promise of Earnings Drives Value

A good banker focuses the acquirer on future, potential EBITDA, pointing to synergies between buyer and seller. The power of potential EBITDA is seen best in entertainment asset acquisitions. Many thought Disney had lost its way when it paid $4B to acquire Marvel, a company that had only two major theatrical releases: The Incredible Hulk ($263M in box office sales) and Iron Man (total series sales reached over $1B domestically). Disney proved the wiser, ringing in more than $9B in receipts since then, not even counting the merchandising bonanza from these movies. Disney used the same playbook when it paid $4B for LucasFilm, only to gross $936M domestically from its first movie in the Star Wars series The Force Awakens.

The seller will capture far greater value when negotiations focus on potential versus historical earnings. We used this approach when we sold Cycle Gear, the largest and fastest growing chain of motorcycle accessories and apparel in the United States. The company’s rapid rate of new store openings was depressing earnings, as many of its stores were less than two years old. By focusing acquirers on pro-forma EBITDA on a “mature store” basis, we captured the value of what the stores “could” earn rather than what they “did” earn.

Determining the proper multiple to apply to EBITDA is part valuation theory and part negotiation art. Three main factors influence the multiple: market conditions, company attributes and the competitive process used in selling the company. Each of these can have a significant impact on value. The company that would have sold at six times EBITDA in 2002 could fetch eight times EBITDA in 2007 because lenders were taking excessive risk, and equity capital was flooding the market. So paying attention to the valuation cycle when planning an exit can make a difference. Company attributes relate to one of three value drivers: growth potential, profitability and risk. They include attributes such as intellectual property, customer diversification, management, competitive mote, business model, scalability, market share, addressable market, regulatory environment, recurring revenue, and corporate culture. While these all impact value, one of the most difficult ones to create is culture, especially a disruptive culture. The skeptic need only look at the impact that disruptive cultures have had in changing the industries of companies like Apple (innovative), Southwest Airlines (fun and irreverent), Amazon (convenient and efficient), and Walmart (low price). The companies that attract the highest valuations and acquirer interest are those with distinct, differentiated cultures.

One of our clients, EagleRider, is the largest purveyor of motorcycle experiences for adventure travel enthusiasts worldwide. Investors visiting the company could not help but fall in love with the passion that everyone shared at the company—employees and customers alike. EagleRider offers riders from all over the world, who come to experience freedom on a Harley or Indian motorcycle, the opportunity to see the world’s most iconic destinations. The enthusiast culture and passion in that company are impossible to duplicate, hence an acquirer would need to buy it. Investors were convinced that EagleRider will disrupt and transform adventure travel.

The Competitive Process: Play to Win

There’s nothing like a competitive bidding frenzy to drive up price. In our experience, competitive processes often drive final bids 25% to 100% higher than the initial bids. When was the last time anyone paid top dollar without the threat of losing the asset to a competing bidder? So what is the appropriate EBITDA multiple? It depends on several factors. But when you have the right market conditions, you run a competitive process and focus the acquirer on your company’s ability to disrupt your industry, frenzied bidding becomes emotional, and disciplined valuations give way to the emotional imperative to own an irreplaceable asset.

When emotional bidding replaces discounted cash flow formulas, EBITDA multiples go beyond market norms and values start reflecting what a company “could be.” And whether it is in art, entertainment, sports or business, we value most what stirs our emotion, creates positive disruption in our lives and offers a promise for the future.