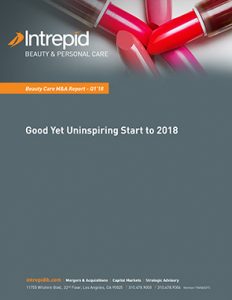 The Beauty Care M&A market recorded 28 transactions in Q1’18. While transaction volume was strong, including a 12% increase over the first quarter of last year, there was a lack of notable high-profile deals in Q1. According to Intrepid, the fairly ho-hum start to the year is more of a hangover from a stellar Q4’17, which saw a host of prominent strategic M&A transactions all closing or announcing before year end. Intrepid remains highly optimistic on 2018 given strong M&A fundamentals particularly in the beauty care sector, broad acquirer interest and our backlog of deals.