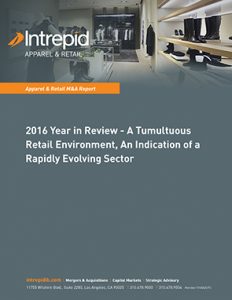 Q4’16 experienced a significant uptick in deal activity, with 26 acquisitions of U.S.-based companies coming off of a slow Q3’16, in which there were only 15 deals. The average domestic disclosed deal value was $174 million, with the largest being the $1.8 billion dollar acquisition of luggage company Tumi Holdings by Samsonite International. Other notable deals included the acquisition of luxury brand Donna Karan International from LVMH by G-III Apparel Group for $650 million and the acquisition of American Apparel by Gildan Activewear for $88 million.

It was a difficult year for many brands and retailers across the sector. Bankruptcy filings were a common theme, including outdoor retailers Sports Authority and Vestis Retail Group (the operator of the Eastern Mountain Sports, Bob’s Store and the Sport Chalet) to casual apparel retailers such as American Apparel, Aéropostale and Pacific Sunwear of California (PacSun). Some companies were able to recover, such as PacSun’s court-approved bankruptcy restructuring plan to reduce debt and close stores, while others such as men’s apparel provider Hampshire Group were forced to liquidate. Even retailers like Nasty Gal, once seen as an example of a successful omni-channel retail strategy, filed for Chapter 11.

Alternative retail models, including direct-to-consumer Warby Parker and subscription service Dollar Shave Club, flourished in this year’s retail environment. The growing pervasiveness of social media and technology, as well as the presence of eCommerce giant Amazon, will likely continue to reshape the sector in 2017.